The concept of homeostasis and cybernetics indicates that we are controlled by the automatic parts of our minds that we are not aware of. It can be best explained from the story about the Elephant and the rope. It goes something like this:

A man was passing some circus elephants when he notices the fact that these huge powerful creatures were being held by only a small rope tied to their front leg. No chains, no cages. It was obvious that the elephants could, at anytime, break away from their bonds but for some reason, they did not. He saw a trainer nearby and asked why these animals just stood there and made no attempt to get away. “Well,” the trainer said, “when they are very young and much smaller we use the same size rope to tie them and, at that age, it’s enough to hold them. As they grow up, they are conditioned to believe they cannot break away. They believe the rope can still hold them, so they never try to break free.” The man was amazed. These animals could at any time break free from their bonds but because they believed they couldn’t, they were stuck right where they were. 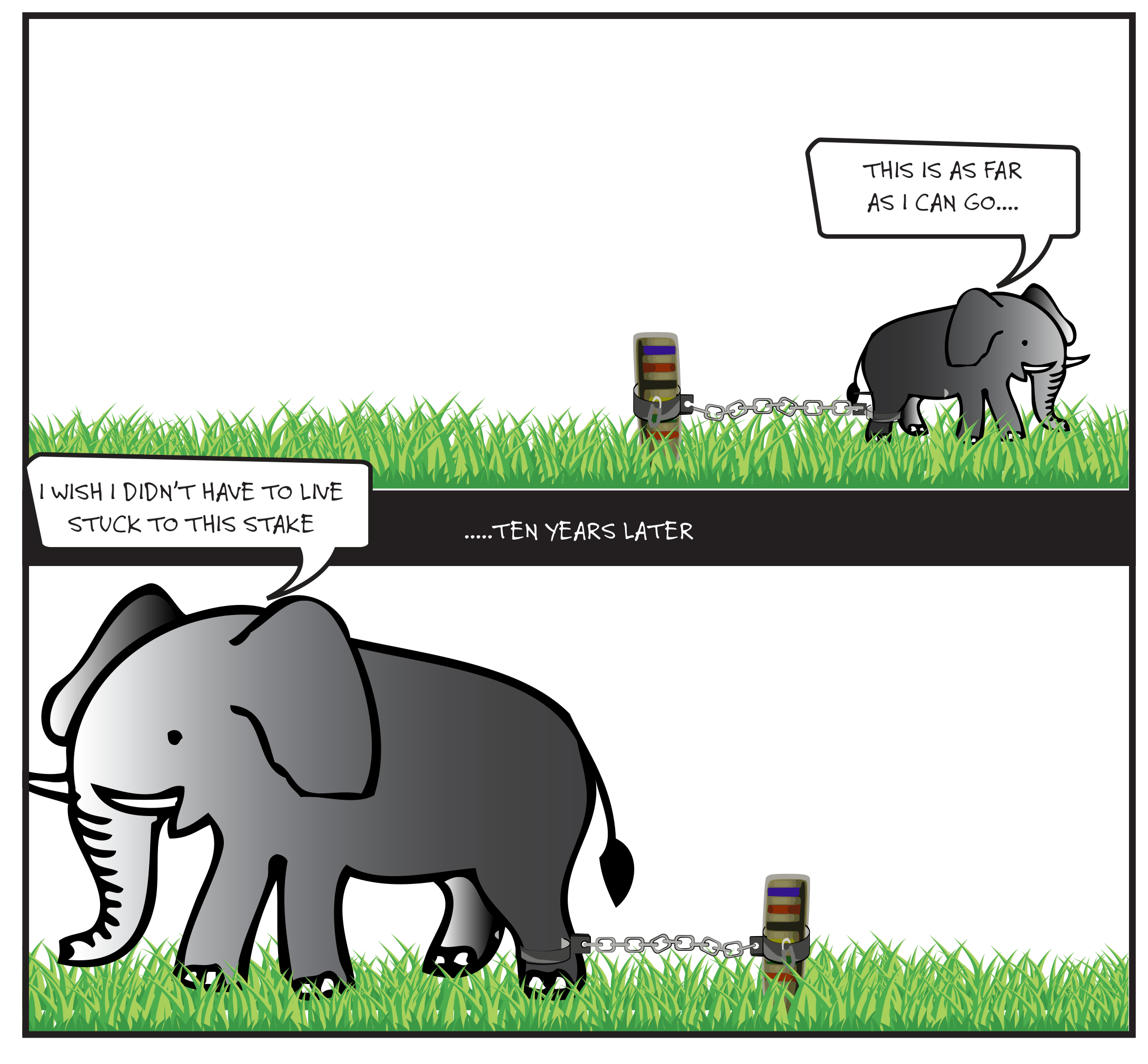 This story is so powerful because we are often the elephant in this story, we are the ones who hold ourselves back because of the stories we tell ourselves consciously and unconsciously. This is what is often referred to in neuro-linguistic programming (NLP) as limited beliefs, I like to call it our pre-programmed autopilot. Psychologist Dr Carol Dwek, the author of Mindset, would refer to this as a fixed mindset believing that you cannot change. And the cosmetic surgeon and author of Psycho-Cybernetics Dr Maxwell Maltz would have called it a cybernetic mechanism.

In simple terms, cybernetic mechanisms, homeostasis and equilibrium all mean the same thing. That is - a system has a ‘happy medium’ where it likes to function. And this is how our minds work also; to keep things functioning as it thinks it should go based on previous experiences, this means it keeps your emotions, thoughts, habits and actions near a relatively predictable baseline. The problem that arises is if someone wants and desires to make a change - then our mindsets keep automatically defaulting back to this happy place or baseline. This is the cybernetics and homeostasis in action. Consider the analogy of a heatpump set to 20 degrees celsius. If the room gets too hot the heat pump shuts off, and if a door is open and the room gets too cold the heatpump kicks in, the heatpump has an inbuilt cybernetic mechanism. Or cruise control in a car? The engine wants to keep you at the speed that it has been set, if you're doing too fast or too slow the cybernetic mechanism gets you back to the set speed. Migrating birds also have a cybernetic mechanism so that when blown off course they can find their way to their destination, just like an autopilot.

So what has this got to do with the mind you ask? Well, the mind operates using the same automatic system. For example, when Dr Maltz made people physically beautiful with his cosmetic surgery, their mindset/psyche didn’t change and they still felt ugly, unworthy, or not enough and this is because self worth is a cybernetic mechanism. Their mindset is set on ‘ugly’ so even though people think they are ‘beautiful’ their cybernetic mechanism will default back to what it knows, and that is “I’m ugly”.

When someone struggles to get in shape, this is usually not because of lack of knowledge or resources of what to do, it is because your mindset/psyche has programmed your self image, thoughts and habits to keep you where you are. Again, this is a cybernetic mechanism, this is the homeostasis of your psychology. Unless the self image is reprogrammed people will find themselves only being able to get fit temporarily.

When someone believes that they are terrible at maths, all of their habits and actions will confirm this belief. And just like the elephant and the rope, that belief serves as an cybernetic mechanism to keep things at your happy medium or baseline.

When an athlete or performer is unable to break through a plateau, this is often due to the mind keeping them in a state of homeostasis. The mind needs to learn that the new expectation is 20 degrees celsius no longer, that the athlete or performer has now set the cybernetic mechanism at 25 degrees or upped the speed on the cruise control from 95kmph to 120kmph.

You may have heard the story of when Roger Bannister first broke the 4 minute mile in 1954 it was deemed impossible. Once he was able to do it, it changed people's paradigm and shortly after many broke the barrier as well. Bannister’s feat had set a new baseline, a new expectation, a new belief, this had created a shift in the homeostatic psyche of the running world which led to these outcomes. This changed people's psyches and their behaviours and actions shifted, in short they believed it possible and their training, preparation and execution reflected it. It didn’t happen because of thought alone, there are many other factors, but without the psychological change it wouldn't have happened. 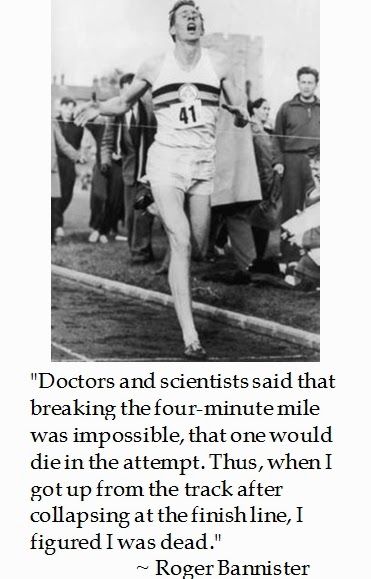 So what does this mean for training and development?

While this concept is relatively simple, it is not well understood and hard to execute. However if it is understood the ramifications for the performer or athlete are truly life changing. What it is saying is that we have the ability to set a new trajectory in our lives by resetting our cybernetic/homeostatic mechanism to a higher degree of difficulty. When we are operating in this higher degree of difficulty it will be hard and our psychology will try and default our automatic processes, thoughts and behaviours back to the previous baseline to keep us safe.  However with the right methods, support, and structure this new performance baseline will become your new normal.  It’s like updating the software on your phone, you will essentially be a newer updated person, and you can continue to do this throughout your entire life to reset what you think you are capable of.  When someone has the lightbulb moment and truly understands this principle it is a beautiful thing to behold, you can notice that the individual will start training and learning at an entirely different level because they realised that homeostasis that had pre-programmed them was not fixed, was not real, and was driven by automatic or subconscious processes. They now understand cybernetics/homeostasis.

Imagine telling the elephant that the rope was a metaphor for how it had been conditioned to think and behave a certain way. That elephant would break free of the shackles and take back its power and become truly free. In all my years coaching I’ve never seen an athlete that did not have another gear, that could not set a different baseline, that could not set a new trajectory for their life. A lot of people think they have a fixed potential that they can aim for, this is a trap because we can in fact expand, grow and adapt. This concept is maybe the single most important concept for a young person to understand.

Back to How ‘Us’ versus ‘Them’ Thinking Affects Sport, Politics, Business and Life
Use left/right arrows to navigate the slideshow or swipe left/right if using a mobile device