It is hard to get outside of our comfort zone to make different decisions or lifestyle choices. It is so hard that most people will stay comfortable and look to try new things, learn a new skill, get fit, or grow as a person. We stay stuck in a pattern of memorised behaviours that is usually pre-programmed since childhood. There is nothing wrong with this, but the problem is there are so many people wanting to change, to do things differently, and make different decisions but they simply can’t, or they tried and it didn’t work out. There is a reason for this and it is due to millions of years of evolution and hardwiring of our brains. Doing hard things is very hard.

So what is the science behind this? A quick history of psychology and neuroscience.

Charles Darwin - Origin of species touches on psychology and how it is based on the principles of natural selection and sexual selection. Those with minds and brains more suitable to the environment were able to thrive, survive and therefore pass on their genetics and knowledge. This concept of evolution and adaptation is a foundational theory for many of the following theories on psychology.

Around 1900 Sigmund Freud communicates the concept of a conscious mind and an unconscious mind. Basically what he was saying was that we have a hidden part of our psyche that he called the unconscious, that we are usually unaware of the unconscious process but that it drove much of our decision making and behaviour. Since then, people have used the illustration of an iceberg to describe this concept, the unconscious being under the surface and the conscious being above the surface. While many of Freud’s theories have been disproven, his concept of the conscious and the unconscious is still the dominant theory in 2021, only it has been built on and revised as neuroscience and psychology research has advanced since Freud’s time.  By nature, categorisations are limiting and simplistic, however it can be viewed as a metaphor to help us make sense of the concept.

1943 Abraham Maslow publishes the ‘Hierarchy of Needs’ - Maslow describes his hierarchy of needs as being made up of five psychological motivations, which are physiological, safety, love, esteem, and self-actualization. Maslow describes these needs as being in an approximate hierarchy where the first level of needs (physiological) needs to be taken care of first, then safety, then love etc. Once one level of needs is taken care of, the mind moves on to the next level of needs, and so on until self-actualisation is reached.

This work from Maslow aligns with the theory that there is a primitive part of our brain that calls the shots before someone can self-actualise, which is a fancy name for someone who is able to lead a fulfilling life of personal growth and contribution, the opposite would be someone living in a state of physical stress and survival.

1964 Dr Paul MacLean discovers the limbic system and goes on to develop the ‘triune brain theory’. MacLean, an American physician and neuroscientist, formulated this model which is based on the division of the human brain into three distinct regions. MacLean's model suggests the human brain is organised into a hierarchy, which itself is based on an evolutionary view of brain development. The reptilian brain, at the core, is responsible for arousal, bodily homeostasis, reproduction, and other automatic functions.

The mammalian brain surrounding it is involved with our emotions and memory. And the most recently evolved human brain, required for conscious thought and self-awareness, sits atop the other two. We call this human part of the brain the cortex which is the latin word for tree bark because of the similarities in appearance. As you’re probably starting to notice, this theory was probably heavily influenced by Freud’s theory of an unconscious primitive part of the mind and conscious mind. While the concept is over simplistic compared to modern day neuro-science, the three categories do still serve as an easy way to understand the brain.

And by the way, Elon Musk’s team has ambitions to add a 4th category to this model of the brain with their ‘neurolink’ program. They believe that they will be able to hook someone's brain up to the internet. Currently there is a huge gap between current neuroscience knowledge and making this a reality, but I admire their ambition nonetheless and Musk would have some of the resources to employ some of the most skilled neuroscientists to work on the project. 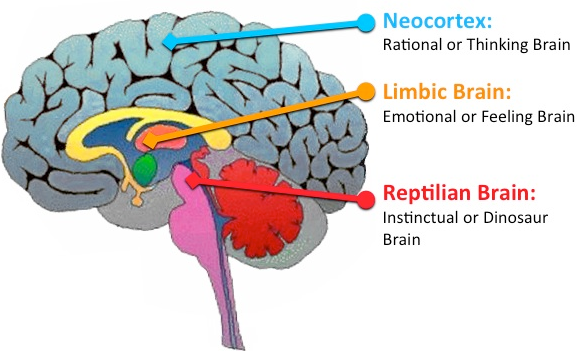 2006 American psychiatrist Dr Bruce Perry develops the neurosequential model for childhood development, education and trauma therapy. This model categorises the brain into four components: The primitive brainstem, the midbrain, limbic brain and the cortex. The fundamental principle of this approach is recognition that the brain develops in a certain order of neurosequential development. This knowledge is especially important in understanding how children learn and why they may behave as they do. The concept is widely used by educators throughout the world and as you will see it is based on the work of Freud and Paul MacLean. 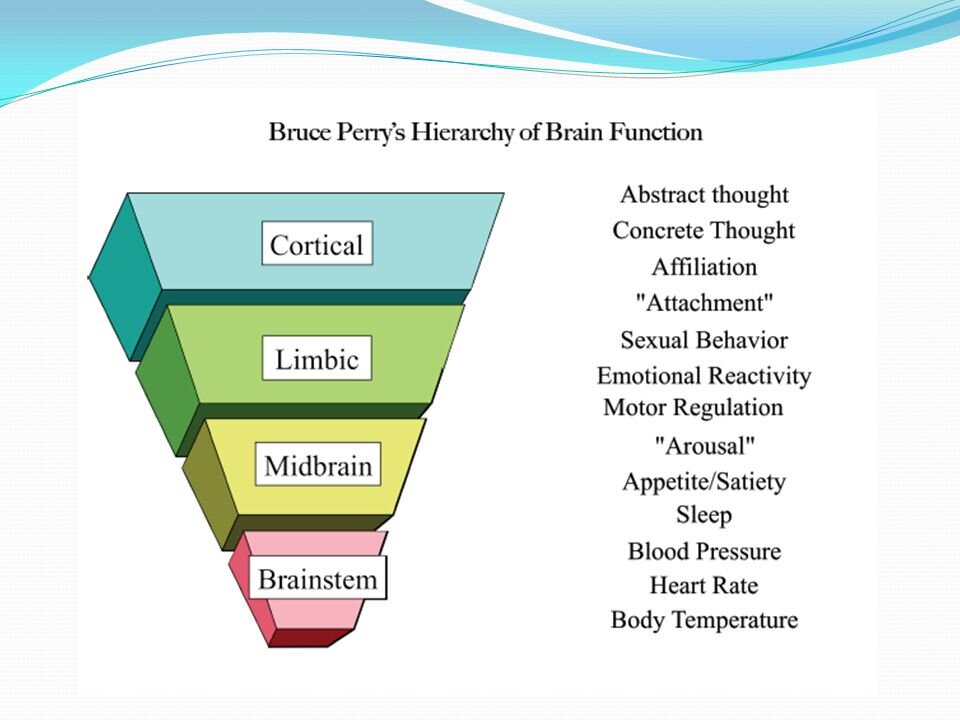 2006 Dr Jonathan Haidt uses the elephant and the rider analogy for behavioural change. Haidt, a New York University social psychologist, argues that we have two aspects to our mind: an emotional side (the elephant), and an analytical, rational side (its rider). Haidt’s analogy is that the rider is rational and can therefore see a path ahead while underneath him, the elephant provides the power for the journey. However, the elephant is irrational and driven by emotion and instinct. What Haidt has done here is come up with a simple analogy to explain the unconscious mind (elephant) and the conscious mind (the rider). It looks like the rider is in charge, but when there’s a disagreement between the elephant and the rider, the elephant usually wins. 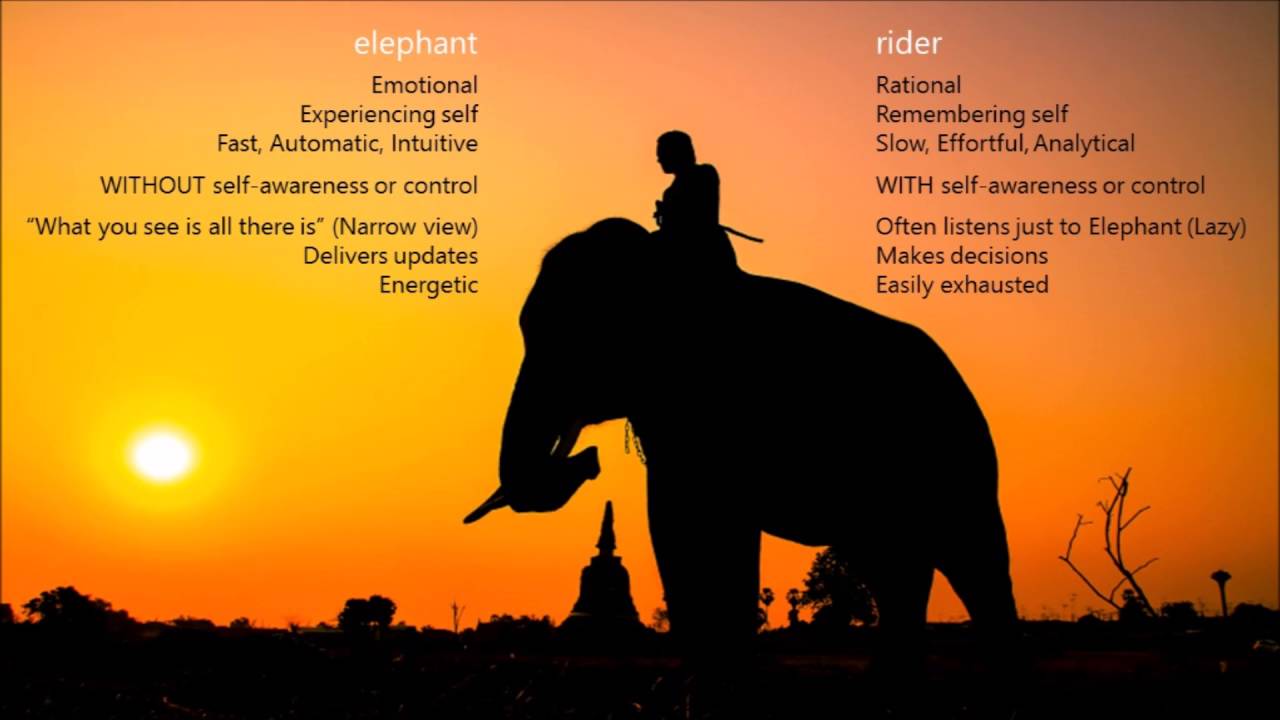 2011 Israeli psychologist and economist Dr Daniel Kaneman writes ‘Thinking, fast and slow’. In this book, Kaneman describes how our mind operates in two systems. The fast system he calls system one and the slow system he calls system two. System one is you guessed it the automatic unconscious parts of our mind that we don’t have to think about, and system two is the slower rational and ‘thinking’ part of our minds. As you may be able to tell, the terminology may have changed but the concept is the same as the previous analogies.

2012 Professor and psychiatrist Steve Peters writes the ‘chimp paradox’. Peters uses a similar analogy to Dr Jonathan Haidt, but instead of an elephant he calls the emotional part of the mind the ‘chimp’. This ‘chimp’ mind is in conflict with the prefrontal cortex or human part of the brain. This analogy while simple to understand is not a favourite of mine, as it is scientifically a bit off given that chimps also have a prefrontal cortex, albeit not as developed as ours.

2019 New Zealand Psychiatrist Dr Ceri Evan uses the red and blue analogy in his book ‘Perform under pressure’. Evans bases this analogy on a similar hot and cold analogy, which talks about how the hot or ‘red’ parts of our mind are unconscious and emotional, whereas the cold or ‘blue’ parts of the brain are involved in rational thinking. In his analogy, the blue part of the brain is the prefrontal cortex (especially the left hemisphere), and everything else is red. Being able to switch from red to blue to manage our situation is the key concept of the book. Can you see the consistency with all of these theories and metaphors?

2017 Dr Robert Sapolsky an American neuroendocrinology researcher finishes his book ‘Behave’. This book provides one of the most comprehensive cross-disciplinary scientific analyses on human behaviour available. It covers the complexities of why people behave the way they do. Saplosky notes that our behaviours are influenced by a multitude of factors, some that happen seconds before the action takes place, to thousands of years before. 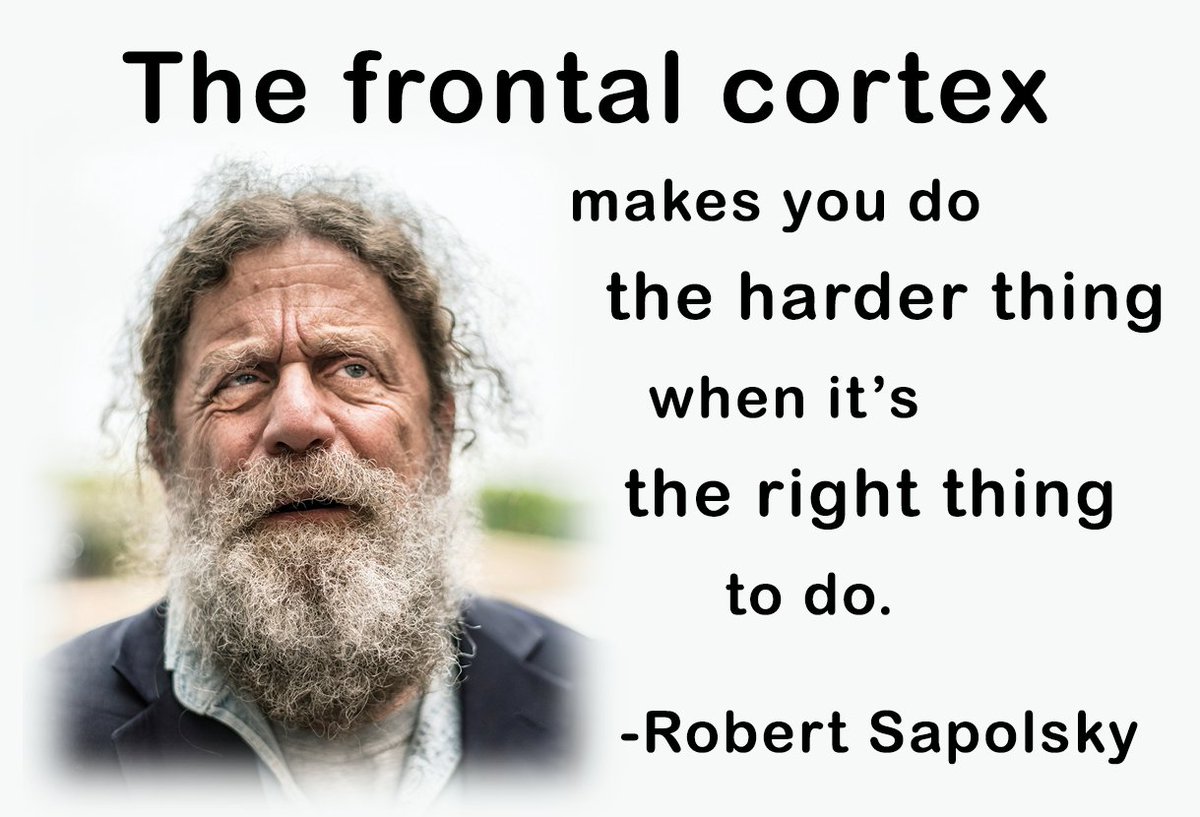 2018 Mark Solms ‘predictive mind theory’ theorises that the mind tries to predict things automatically and is a system that is continuously improving it’s algorithm. Learning, experience and consciousness constantly improve our implicit, or unconscious predictions and we take note of events only when the brain's predictions fail when something unexpected comes up. While this may seem like a radically different idea, it is essentially the same idea - that we have an automatic system and a more ‘conscious’ system.

So what is the takeaway from these theories?

Some of our greatest minds on the planet have dedicated their lives to try and work out how the mind works and yet we still understand very little about it due to its complexity. However, there is some very significant common ground both scientifically and conceptually that they all agree on. There is a system that we have less control of and there is a system that we have more control of, and that most of the time the system that we have less control of calls the shots. They all agree that people are heavily influenced by this part of our minds that is outside of our awareness (that many call the subconscious, unconscious or automaticity). Meaning that our thoughts and behaviours are often not part of our ‘conscious’ control.

Is there little wonder why we struggle to make change, to do things differently and make some difficult decisions? Is it any wonder that most people are stuck in their same thought processes, habits, actions and lifestyle?

The other common ground that all of the experts agree on, is that our minds have the ability to self regulate and provide an automatic system that makes things faster and acts as a safety mechanism. This offers an internal homeostasis,  and we are usually not aware of it because it regulates the functioning of our organs and the regulation of our body temperature etc and we don’t need to be aware of these processes. Our brain has evolved for automaticity, it’s like an algorithm that predicts what you are going to do next, so most bodily functions adjust automatically, it keeps us safe and healthy and everything operates smoothly. However, it is also why most people go their life on the same autopilot or cruise control. It’s great if safety and security is your main value, however there are some people that want to change their behaviour but just cannot.

So here is the punchline - we need to learn to do the harder thing when it is the right thing to do. This means overruling your subconscious automatic algorithm, and it is hard to do.

Think of something that you’d like to do but have not been able to:

Maybe it’s getting in shape? Learning a difficult skill? Taking a risk? Going on an adventure? Breaking through a plateau? The chances are you haven’t been able to do this because that thing will be hard. And our brain is not used to taking us there. A pattern needs to be interrupted, and new neural pathways need to form for this to occur. This requires significant activation energy and is the reason why most people do not do hard things, even when they are the things that they really want to do and even when it is the right thing to do.
Back to A basic history of psychology and why it is so hard to do the right thing
Use left/right arrows to navigate the slideshow or swipe left/right if using a mobile device